Brittle Hollow is the third of six planets in the Outer Wilds' solar system. Its surface is largely barren and rocky, and over time it will break apart and fall into a black hole at the center of the planet. Brittle Hollow is home to an enormous Hanging City, the Tower of Quantum Knowledge, the Southern Observatory, a Gravity Cannon, and the Black Hole Forge used by the Nomai to craft the warp cores for the Ash Twin Project.

Brittle Hollow is a highly unstable planet that formed naturally around the black hole at its center. Its dry, rocky surface is fractured and prone to collapse, and in the 22 minutes of game time the player can observe as most of the planet's crust breaks away and falls into the black hole. These pieces then emerge at the White hole next to White Hole Station. This collapse is precipitated by the balls of lava ejected from the planet's moon crashing into the surface. Traversing the planet's precarious remains is a challenging task, but despite the likelihood that a player will slip and fall into the black hole, the fact that White Hole Station lies very close to the black hole's exit point means that the planet's long drops aren't as dangerous as they are simply inconvenient.

Escape Pod 1 resides on the surface, its metal tempered by the heat of its descent to the planet. From the escape pod the player can follow a trail of precarious wooden bridges created to span the gaps between rocks, indicating that the enormous drop towards the planet's core existed millennia ago when the Nomai first entered the system.

The planet's two poles are topped with snow, and the north pole has flowing water. This leads to ice formations beneath the surface into which the Hanging City is built.

The rest of the planet's interior is made up of a mixture of blue metallic and red crystalline rock formations. The geometric lattice of these formations exhibit clear fracture points and planes of weakness, which makes it susceptible to the collapse that the player can witness in action during the game.

This article is a stub. You can help Outer Wilds Wiki by expanding it.

The Hanging City is the biggest Nomai settlement in the Solar system, hanging to the ice of the North Pole where the plant's crust was stable enough for a long-term settlement. Above the Black Hole, Nomai culture did not only survive but thrived. The City is divided in four districts located on top of each other, originally all accessible by a now broken vertical passageway.

The Black Hole Forge is suspended between the Hanging City and the black hole at the planet's center. It's the source of all the Nomai warp cores found around the solar system, including the Advanced Warp Core that powers the Ash Twin Project. The forge itself can be raised and lowered from the control room on the first level of the Hanging City, and accessed via the uppermost level, which itself can only be accessed via the warp portal on Ash Twin. The Black Hole Forge was used to craft the Advanced Warp Core, which powers the Ash Twin Project.

The Meltwater district has a controller that raises and lowers the Black Hole Forge. There's a secret hole on the surface that leads to here.

The Eye Shrine District houses derelict Nomai buildings and a small shrine with writing detailing the Nomai's thoughts and knowledge about the Eye of the Universe.

The School District was made for the children who lived on Brittle Hollow, inside there are classrooms with writing explaining their existence stuck in this solar system and a Nomai tradition called 'festivals'. There is a gravity crystal path here that leads to the Original Nomai Settlement. 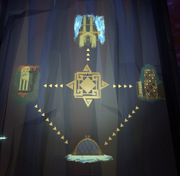 A mural of Brittle Hollow's locations. From the top clockwise, it depicts the Hanging City, the gravity cannon, the Southern Observatory, and the Tower of Quantum knowledge.

The crossroads is a minor location most notable for featuring a map of Brittle Hollow (right) and being adjacent to Riebeck's camp. The player can use the map to see which locations are reachable from where, though centuries of deterioration means some of the pathways have broken down and will continue to do so over the course of the game. On the surface is located a small settlement that used to be the gravity crystal workshop. Riebeck's first camp can also be found there. Under here is the mural of Brittle Hollow that leads to the Tower of Quantum Knowledge which leads to the Southern Observatory. On the other side of the Tower of Quantum Knowledge, there is the Gravity Cannon, where Solanum took her first flight to the Quantum Moon, and also leads to the Southern Observatory.

Accessible from the crossroads or the surface, Brittle Hollow's gravity cannon is found on the equator. Its associated shuttle is resting on the Quantum Moon, and the player can recall it to read the notes inside written by a Nomai named Solanum just after landing the shuttle on the Quantum Moon and just before setting foot outside.

The gravity cannon is likely to fall through the black hole near the end of the cycle.

Brittle Hollow is orbited by the volcanic moon, Hollow's Lantern. The lava level slowly lowers as time goes on. The balls of magma that shoot from the moon crash into the surface of the planet, precipitating the collapse of the planet's crust. The Nomai named Root used the moon's lava to heat-test mineral samples supplied from the Nomai mines on Timber Hearth. These samples were then used to encase the Ash Twin Project.

Located on the equator under the crashed Escape pod 1, this village is the first place the Nomai made their home on Brittle Hollow, hidden under the surface after a now breaking down stairway. After a while, the Nomai realized this part of the crust was still too exposed to Hollow's Lantern bombardement, and they moved North along a gravity crystal path to create the Hanging City in a safer place.

On the south pole is a domed observatory only accessible from beneath Brittle Hollow's crust. There's a door on the surface, but it's broken, and the player can find Riebeck's ship and recorded notes of their plan to search the Nomai ruins on the equator for a path underground.

Next to the entrance is a projection stone of a conversation with the team building the orbital probe cannon on Giant's Deep, who had been using the cyclones to launch parts into orbit only to have one piece unexpectedly driven beneath the ocean's usually-impassable current. To figure out what happened, a Nomai named Spire built two models of Giants Deep cyclones there at the observatory. The models are still present and active.

Additionally, there's a Nomai three-dimensional modeler hooked up to an Eye Signal Locator, built after and more sophisticated than the one on the Attlerock. It can be activated to show the orbits of each planet in the solar system, but is unable to locate the Eye and can only display its many potential orbits. On the same level as the Locator controls are two conversations about the Nomai's ongoing search for the Eye. One covers what they know about the Eye so far and laments their lack of progress finding it. In the other, the Nomai Mallow suggests simply launching a probe into the outermost reaches of the solar system to see if it happens to find the eye. Cassava points out that the odds of randomly firing the probe at the correct trajectory to find the Eye were extremely small, but Conoy points out there's another ongoing project that could take luck out of the equation. 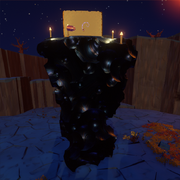 The tower shard, above the Tower of Quantum Knowledge

The Tower of Quantum Knowledge is suspended from the section of Brittle Hollow's crust where the Nomai found a quantum shard, and contains information crucial to the Quantum Moon pilgrimage. Most of the tower is inaccessible at the start of each loop, as the gravity panel path leading into the tower is broken and impassable. However, the planet's ongoing destruction is likely to drop the tower through the black hole partway through the loop, and once it exits at the White Hole Station it can be freely explored in zero-gravity.

The tower contains two scrolls (one congratulating a Nomai named Solanum on reaching the last step before she travels to the Quantum Moon, and one on a shelf that reminds the pilgrim that they're they're taking part in a tradition of curiosity and exploration by following in the footsteps of everyone before them who sought the Quantum Moon) and a Quantum Moon Locator.