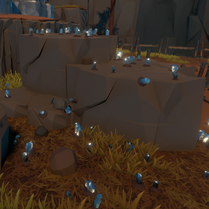 Ghost Matter is extremely dangerous and will severely injure or kill any living being who lingers within it for more than a brief moment. However it doesn't universally appear wherever there are Ghost Matter crystals, and some patches of crystal can be crossed safely. Firing the Little Scout through patches of crystal, or taking photographs with the scout's camera can inform the player as to whether a path is safe to cross.

When interacted with, Ghost Matter visibly flares up as it reacts with whatever has contacted it. If the player enters a patch of Ghost Matter, their screen becomes noticeably distorted and becomes a discolored blue-green color. If the player lingers for more than a few seconds, they will very quickly die. The exception is when the Ghost Matter is submerged in water, such as on Giant's Deep when an island is thrown into the sky and passes under the water temporarily when it lands. This shows that Ghost Matter is not dissolved by water, but its hazardous properties are neutralized.

Ghost Matter was brought to the system within the The Interloper, a comet that had recently entered the Solar System during the Nomai civilization. The Nomai detected the comet's arrival shortly after the failure of the Sun Station. Upon investigation, the Nomai explorers Poke and Pye discovered a way below the surface of the comet and discovered within an incredibly dense, highly pressurized core of exotic matter. Their tests indicated that the core was at risk of rupturing as the comet approached the Sun, and the resulting release of exotic matter could eradicate all life in the Solar System. Before they could warn their clan of the danger, the core ruptured, killing the Nomai explorers and all Nomai in the Solar System instantly. This event ended all Nomai life within the solar system, leaving behind only the remnants of their civilization.

Hundreds of thousands of years later, the remnants of the ruptured core can be found throughout the Solar System in the form of Ghost Matter Crystals. Ghost Matter crystals can be found on most planets in the system, and they remain a deadly hazard to all living creatures. A majority of the Ghost Matter has evaporated by this time.