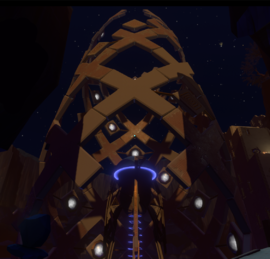 The Gravity Cannon with its shuttle recalled.

Gravity Cannons shoot Nomai shuttles using gravity and recall them using white/black holes teleportation. One is located on Brittle Hollow, it aim directly upwards. The other is on Ember Twin and fires at an angle. Both are still functioning, but there is little data as to what exactly they were meant to do, who built them, why they were built, or how the Nomai used them.

The player can recall the shuttles from their resting places from the probe cannons to easily gain access to the log devices inside. The shuttle resting on The Interloper returns to Ember Twin. And the shuttle resting on the Quantum Moon returns to Brittle Hollow. When recalled a player can fire the shuttles from inside (using the left path on the panel) and recall it (using the center path). The shuttle is very hard to aim and can only receive thrust once, from the Gravity Cannon. It can also be stopped (using the right path on the panel).