Outer Wilds Ventures is a Hearthian organization dedicated to learning about the Solar System and its history. 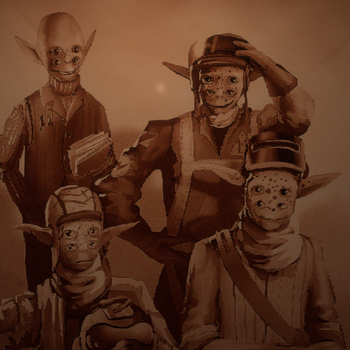 As Outer Wilds Ventures was an organization composed of space explorers, they primarily used and developed technology that would be crucial to the facilitation of space travel, such as the spaceship, scout launcher and Nomai translator. Some technology, including the scout launcher and ship’s artificial gravity technology, were created by reverse engineering Nomai technology.

Previously, the Hearthians knew very little about the Nomai. The Protagonist, with assistance from Hal, developed the Nomai Translator which allowed the astronaut to translate Nomai text into a readable format. This device unlocked the secrets of the Nomai and was a breakthrough for Outer Wilds Ventures and Hearthian understanding of the Nomai, as it allowed translation of all Nomai text. The translator would be used to uncover the mysteries of the Nomai such as where they came from, what they were like, why they came to the Outer Wilds System, and how they were wiped out.

The primary tradition practiced by Outer Wilds Ventures is a pre-launch ritual. After finishing their training, the new astronaut of Outer Wilds Ventures would camp under the stars with Slate before their first launch into Space. They would light a campfire and roast marshmallows while discussing the recruit’s upcoming journey. After waking up the following morning, the new astronaut would ride the escalator up to the launch platform and board their ship, ready to explore the Solar System.