From Outer Wilds Wiki
Jump to: navigation, search
It has been suggested that this article or section be merged with Slate.

Rocket Scientist is the first character that the player speaks to upon waking up. They were the engineer responsible for building the spaceship that the player will use to travel in space.

Speaking with them after the first Loop[edit | edit source]

Speaking with them after a followup Loop[edit | edit source] 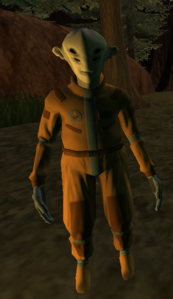 Slate when they were known as the Rocket Scientist
Retrieved from "https://outerwilds.gamepedia.com/index.php?title=Rocket_Scientist&oldid=2796"
Categories: