The Sun is the center of the Solar System and the celestial body which all other astronomical bodies orbit.

The Sun is a large main sequence star at the center of the Solar System which begins each loop as a standard yellow star. As the time progresses in the loop, the Sun ages and grows. At 22 minutes into the loop, the sun explodes in a violent supernova, with the cycle ending shortly after. 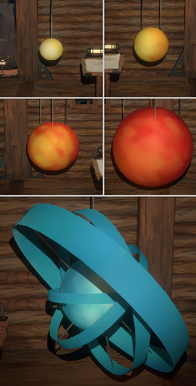 A model of the Sun's life cycle found in The Observatory

The Sun follows the typical lifespan of a large main sequence star, albeit accelerated for game play purposes.

At the beginning of the loop and for the majority of the cycle, the star is an average Yellow star. It is the only stellar phase where the Sun Station is accessible.

Roughly 12 minutes into the cycle, the Sun grows significantly and turns red to become a Red Giant. It grows to roughly twice its normal size and engulfs the Sun Station. After 21 minutes in the cycle, the Sun enters its final moments as the End Times theme plays. At this point, there is 60 seconds left until the supernova.

After 22 minutes into the cycle, the Sun collapses due its inability to support its own gravity. It collapses in on itself to form into a relatively small sphere for a brief moment before exploding outer ward violently with a blue flash. The Supernova grows and accelerates to quickly encompass the entire Solar System.

While the player can escape the blast radius of the Supernova, they will still die with an alternative screen fade as their memories are uploaded to the Ash Twin project. Escaping from the Supernova after removing the core of Ash Twin will trigger the Isolation Ending.

The Sun's only noteworthy feature is the Sun Station, an artificial satellite constructed by the Nomai in an incredibly close and quick orbit around the Sun. The Sun station was initially designed to induce a Supernova in the sun, however it ultimately failed in accomplishing this. The Sun Station is only accessible until the Sun becomes a red giant, as it is destroyed when the sun enters its red giant phase.

The Sun Station is normally accessed by a teleporter, however the Xbox One and Steam versions of Outer Wilds contains the achievement Hotshot for manually landing on the Sun Station. This requires a certain degree of skill as the close proximity to the Sun means the player is under immense amounts of gravity along with having to account for the rapid orbit of the station.