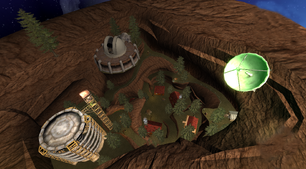 The village, as seen from above.

The Village is a small establishment in one of Timber Hearth's craters. It contains most of the player's species found in the game, many wooden houses and shacks, at least two children, and at least six adults. It has the Observatory, a Zero-G training area, a lift, a pad to launch spaceships, a radio telescope, a few campfires, and most of Timber Hearth's evergreens. The game starts in the village.

The village is inhabited by the four-eyed biped species known as the Hearthians. 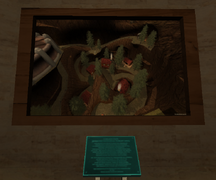 A framed photograph of the village in the Observatory. The green plate reads: This crater has always been our home. In fact, for generations we assumed it was the entire world. Now we know that our crater is one of many geographical depressions on a tiny rock hurtling through the endless void of space. But it's still our favorite.