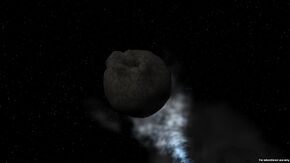 The Wanderer is a comet on a highly elliptical orbit around the sun. It is relatively small, but is fairly easy to land on. Due to the Wanderer's lack of gravity in its interior it would be advised to explore this comet on its highest part of its orbit or you may be pulled away into the sun.

The surface has a slit in it, which provides access to the centre. The core is made entirely of what appear to be the gravity distortion crystals. This is backed up by three pieces of information. The first is that there is no gravity, and the second is that it then explains how the aliens got their hands on the crystals to make the small distortion fields seen around their ruins. The crystals within the comet also match the distortion crystals found throughout the game. This subsequently explains the neat puncture in the surface, presumably the main entrance for miners.

Due to The Wanderer's irregular orbit you may encounter some odd occurrences, at the height of The Wanderer's orbit, it passes relatively close to the Deep Space Teleporter and the wormhole's strong anti-gravity may push the player off of The Wanderer.

During the last minute of the Sun's life The Wanderer passes through Dark Bramble, Where the player is likely to get knocked off of the comet by one of Dark Bramble's vines, but you won't be pulled off by gravity, because Dark Bramble has no gravity. If you are under the surface at the time, keep in mind that Dark Bramble's fog has drag and will slow you down relative to it - potentially slamming you against the Wanderer's crust and killing you. Vines may also clip through the surface and kill you via impact damage in this situation.