Timber Hearth is the home planet of the Hearthians and where the player begins their journey. It has an mainly rocky composition accented with forests, ridges, and waterfalls. The terrain has little variation out of plains and large craters, one of which forms the area of the village.

There are four small Geyser mountains and one large Geyser mountain, the four smaller mountains serve as a way to enter the underground water current underneath Timber Hearth's crust. The largest Geyser mountain serves as the entrance to the Nomai Ruins of Mining Site 2b, and is most likely the player's first encounter with Nomai Architecture (including gravity lifts!)

The Ash Twin Tower receiver is intended to be the first warp receiver the player finds, though the function is not supposed to be revealed until you visit Brittle Hollow and consequently the White Hole Station. The Nomai used the warp receiver to transfer ore from Timber Hearth to the Ash Twin Project with ease. 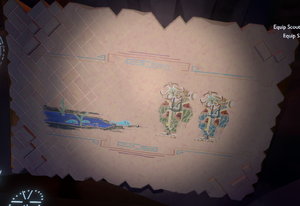 In the reservoir under the bridge, the player can find Nomai writing discussing where to locate a mine in light of having encountered native fauna on Timber Hearth. They describe the creatures as four-eyed and semi-aquatic, implying the species they encountered was that of the player, millennia ago. A mural depicts three of the creatures emerging from a pool while two space-suited Nomai look on.

Mining Site 2b is the first significant site of Nomai Architecture in the game, and is where the Nomai had to move the mining site to after discovering Mining Site 2a was home to "4-eyed semi-aquatic creatures", the Nomai drawings show this to be an ancestor of the Hearthians. Mining Site 2b is where the Nomai mined the ore to construct the impenetrable core of the Ash Twin Project, as it was the only metal strong enough to temporarily withstand the heat of a Supernova. It is accessible via an entrance located within the largest Geyser Mountain on Timber Hearth.

It has been suggested that this article or section be merged with The Village.

Behind a building near the launch tower (<100m) are three gravestones naming financial backers of the game's development. The area is only accessible via flight. 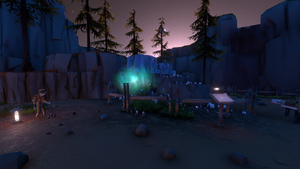 Ghost matter as it appears to the naked eye (invisible), feat. Arkose and the effects of their thrown rock (visible)

DANGER! Inside this fence is a pocket of ghost matter - a strange and impossibly cold substance that's invisible to the naked eyes. The good news is that you can detect ghost matter with a camera. Moving through ghost matter is uniquely painful and will probably kill you. Don't complain to me if you hurt yourself fooling around. - Hornfels

A small fenced-off area that serves to introduce the player to ghost matter, and teaches them how to spot it with a camera. Arkose can be found throwing rocks into it.

Accessible through the mouth of the village geysers is one of many underwater caves that run beneath the surface of Timber Hearth. Aside from connections to that cave system, there's nothing here besides some trash. 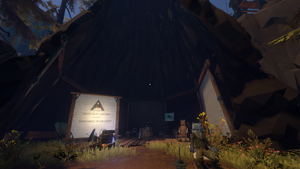 The base of the launch tower

The Launch Tower is a hollowed out tree with a launch pad on top and the starting point for the player's ship. The tower base contains miscellaneous spaceflight equipment (including the pilot chair from Feldspar's inaugural launch into space) and Rutile. The launch pad is accessible by a lift that can only be activated once the player gets the launch codes.

Just off the path from the launch tower, Mica can be found idling by the controls for a miniature version of the player's ship which can be used to practice the flight controls, though the scale and third-person perspective make it more finicky than the actual ship.

It has been suggested that this article or section be merged with The Observatory.

The Observatory (or the Museum) is where the player goes to obtain launch codes at the start of the game. The exhibits introduce objects and concepts that will be relevant to the player's travels, including:

as well as models and notes about gravity, the perpetual expansion of the universe, and the end-of-life cycle of stars.

This is where the player receives the launch codes from Hornfels, and where they become paired with the memory statue.

A platform near the ghost matter patch with a stationary scout launcher and signage telling the user what they can expect to see if they fire the scout in certain directions. The player can use this to get a feel for scout use before they get access to their space suit, and to get a feel for the layout of locations on Timber Hearth.

At the end of a mine shaft (which is actively being used for mining by Tuff) is a cave at the center of Timber Hearth that effectively has zero gravity. The player can use a borrowed space suit to test jetting around in zero-g and conduct repairs on a broken piece of machinery to get a taste for repairing their own ship in space.

Accessible via mine shaft, the Zero-G Cave is an effectively zero-gravity cave at the center of Timber Hearth that Gossan (who greets you at the entrance) uses to train Hearthians in extra-vehicular space flight. In the cave is a broken piece of machinery on which the player can practice zero-g repairs, much like they might have to if their ship is damaged in space.

The Quantum Grove is an area on Timber Hearth that contains both a shard of the Quantum Moon (Grove Shard) and also a quantum poem made by Gabbro. There is a total of 24 positions of the poem, with one being "The quiet shade/ Across old bark/ In the ancient glade/ It's always dark". This area is the easiest and closest quantum shard (bar the Museum Shard) to discover, unlocking the Quantum Frequency for your Signalscope. Whilst this Shard does not have any quantum rules that need learning, once it unlocks the frequency it makes it easier to discover the other Quantum shards across the solar system, so you can start your "Quantum Pilgrimage" 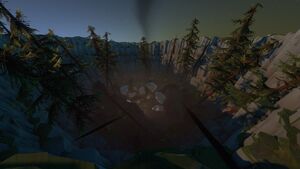 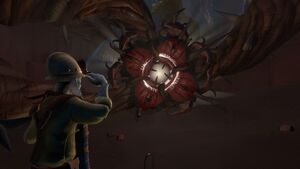 Initially, the player finds a note from Tektite stating that they saw smoke coming up from Youngbark Crater and is going to investigate. Also, they made it clear to not break the scout launcher, which is being used to keep a look out for fires[Source Needed 1].

Upon arriving at Youngbark Crater the player is greeted with a Dark Bramble Seed, which unbeknownst to the Hearthians is beginning to infect the planet.

Speaking with Tektite yields that the seed is clearly not from this planet and it is most likely from the Dark Bramble. More importantly they believe it needs to be destroyed as soon as possible. Tektite states that they want to drag the scout launcher over to the site and shoot a scout into it, before sicking Marl and Hal on it. Thankfully for the player, this seed leads directly to Feldspar's camp.

Outside of this information this area seems to only serve the purpose of: