the comet as seen from Timber Hearth

The Unknown Comet can be found in the sky in front of Giant's Deep. It can only be seen at the start of the game. It is impossible to catch up to the comet using the spaceship, but it can be observed and followed on the map. It moves at a very high constant velocity away from the solar system, and can sometimes spawn moving in a different direction at the start of the game, which is a strange inconsistency to note.

It is possible that the comet has links to the time loop due to the fact that it appears only when the cycle begins.

The traveler at Giant's Deep, Zen Guy (now know as Gabbro), mentions an ancient satellite (Orbital Probe Cannon) that shot something into space and then fell into the center of the planet. One hypothesis is that the object fired into space is the Unknown Comet since it originates at Giant's Deep. This may or may not be dismissed by the fact you can supposedly see the comet and random distant explosions several times in some cycles of the Time Loop, but citations are required. While these random explosions in space seen throughout a cycle may be from stray Devil's Furnace fireballs, or speculated to be other galaxies/systems exploding just as yours soon will (supported by the fact that these explosions always occur on top of a star on the sky box texture in space), there is conflicting witness accounts as to whether the unknown comet itself can be seen more than once after the start of a cycle. 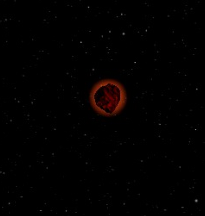 A fireball from Devil's Furnace

It was previously thought that the object is a fireball from Devil's Furnace, but it has been shown that this is not the case.This can be proved, as in the beginning of the time loop, Brittle Hollow is completely intact (to some extent) so there is no way any of the fireballs could have fell into the black hole in the center, in the first place.