Warp Cores are a technology created by the Nomai to transport information, living beings, and inanimate objects from one place to another, or into the past. 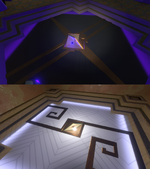 The time of arrival is always one hundred-thousandth of a second earlier than the time of departure.[1] This negative time interval can be increased by adding more energy to the warp core. The energy required to extend the interval increases at an exponential rate.[2]

The negative time interval shown in the High Energy Lab. The scout exits the white hole before it enters the black hole.

Since standard warp cores only allow travelling from a black hole to a white hole, it is impossible to warp to an unfamiliar location. Another warp core needs to be placed at that location first before warping between the two locations is possible.

Warp cores were originally created by Annona, a Nomai from Escall's Vessel.[3] His advanced warp core design was shared with the other Nomai clans at festivals, allowing all Nomai clans to warp long distances and explore more.[3] After warping to follow the signal from the Eye of the Universe, the Vessel's warp core needed time to recharge as the jump to the signal was significant.[4] However, the warp core sustained irreparable damage when the Vessel crashed on Dark Bramble, rendering it unusable.[5]

Annona landed on Ember Twin with Escape Pod 2.[6] Some time after the Nomai on Ember Twin and Brittle Hollow were reunited, Annona took up Poke as his apprentice.[7] Before he passed away, Annona explained many of his warp core designs to her.[8]

After Annona's death, Poke started working in the Black Hole Forge in the Hanging City.[7] With the help of Clary and Root, she managed to recreate Annona's simpler warp cores.[9] They were used to travel between White Hole Station and Brittle Hollow.[9] 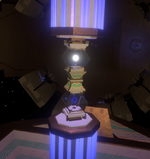 However, the project was put on indefinite hold when it turned out that the supernova which would power the advanced warp core could not be triggered by the Sun Station.[16] Before the Nomai could think of an alternative solution, they were all killed by the Interloper's Ghost Matter which flooded the whole solar system almost instantly.[17]

After 200 millenia, the Nomai's warp cores were discovered by Hearthian astronauts. They used the warp cores to recall their scouts.[18] The Ash Twin Project ended up being automatically activated when the Sun reached the end of its natural lifespan and went supernova. This powered the project's advanced warp core and started the time loop that the Protagonist finds themself in.

Simple warp cores are used for the following purposes:

The advanced warp cores are used to: